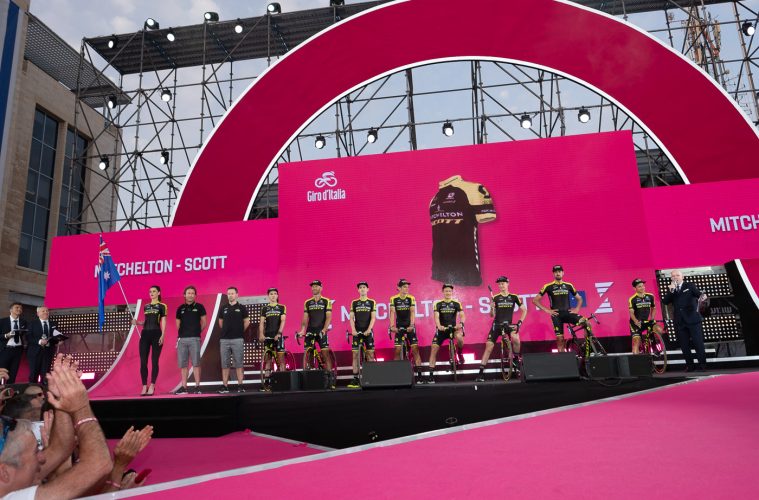 In his article in Cycling Tips Shane Stokes argues that cycling and politics are inseparable, and explains why he decided to boycott Giro d’Italia in Israel. In doing so, he plays into the hands of those who do not want peace, promotes extremism, radicalism, boycott and conflict. His values contradict the spirit of sports and cycling.

Shane Stokes is a respected, articulate member of the cycling media, working as the news editor for Cycling Tips- Australia’s digital cycling magazine. Stokes’ starts his post with a visual detail of a specific incident where within Hamas organized protests, a journalist was killed by an Israeli sniper. This case happened apparently by mistake. Needless to say that Hamas and Stokes leverage on that tragedy and portray Israel as shooting journalists by policy, which is absolutely false. He then explains how bad life is for the 1.8 million people living in Gaza, which is unfortunately true. But neglects the context in his statement. Stokes ignores the true reasons as to why they are blocked by both Egypt and Israel. 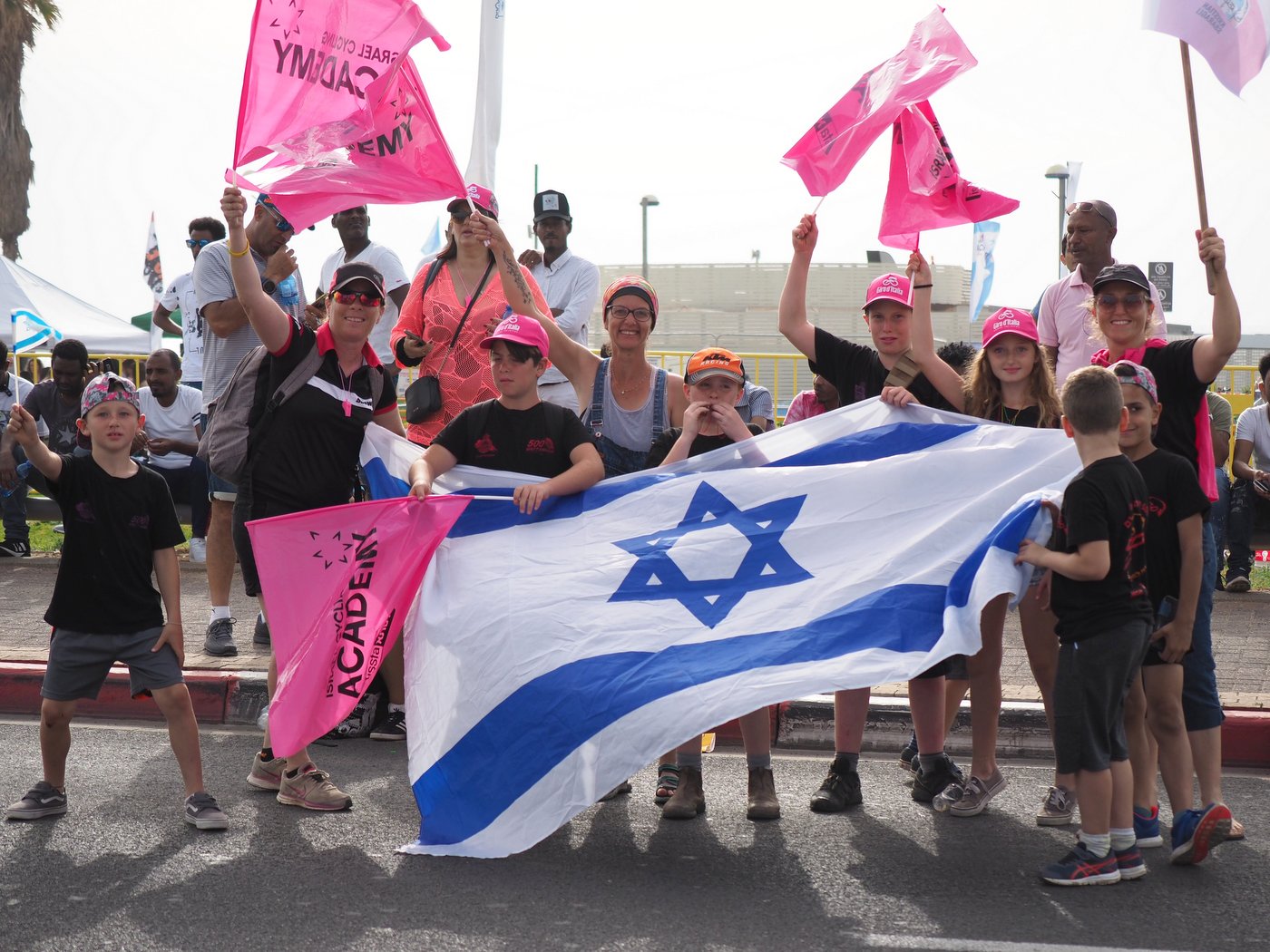 This cycling club brought children to watch the Giro

In his article the context is provided only when it supports portraying the Palestinians as victims of the state Israel. When he describes the 1948 war as a war triggered by “establishment of the Jewish state” – as opposed to a war that was initiated by the Arab countries in an effort to annihilate a newly born state (which was just approved by the UN)  only a few years after the Holocaust.

For Stokes, the Palestinians are always victims – a result of the reality that surrounds them, but never the result of their actions. He neglects to mention the multiple steps and propositions made by Left wing Israeli governments in the past, that could have yielded a Palestinian state in the west bank and Gaza. Again, conveniently, Hamas choosing terror as their way is not mentioned. Its radical Islamic jihad leadership, its missiles shot to towns in Israel, its attack tunnels (which cost millions of dollars – that could have been spent on creating jobs and better economy and life in Gaza) are all absent from this article. 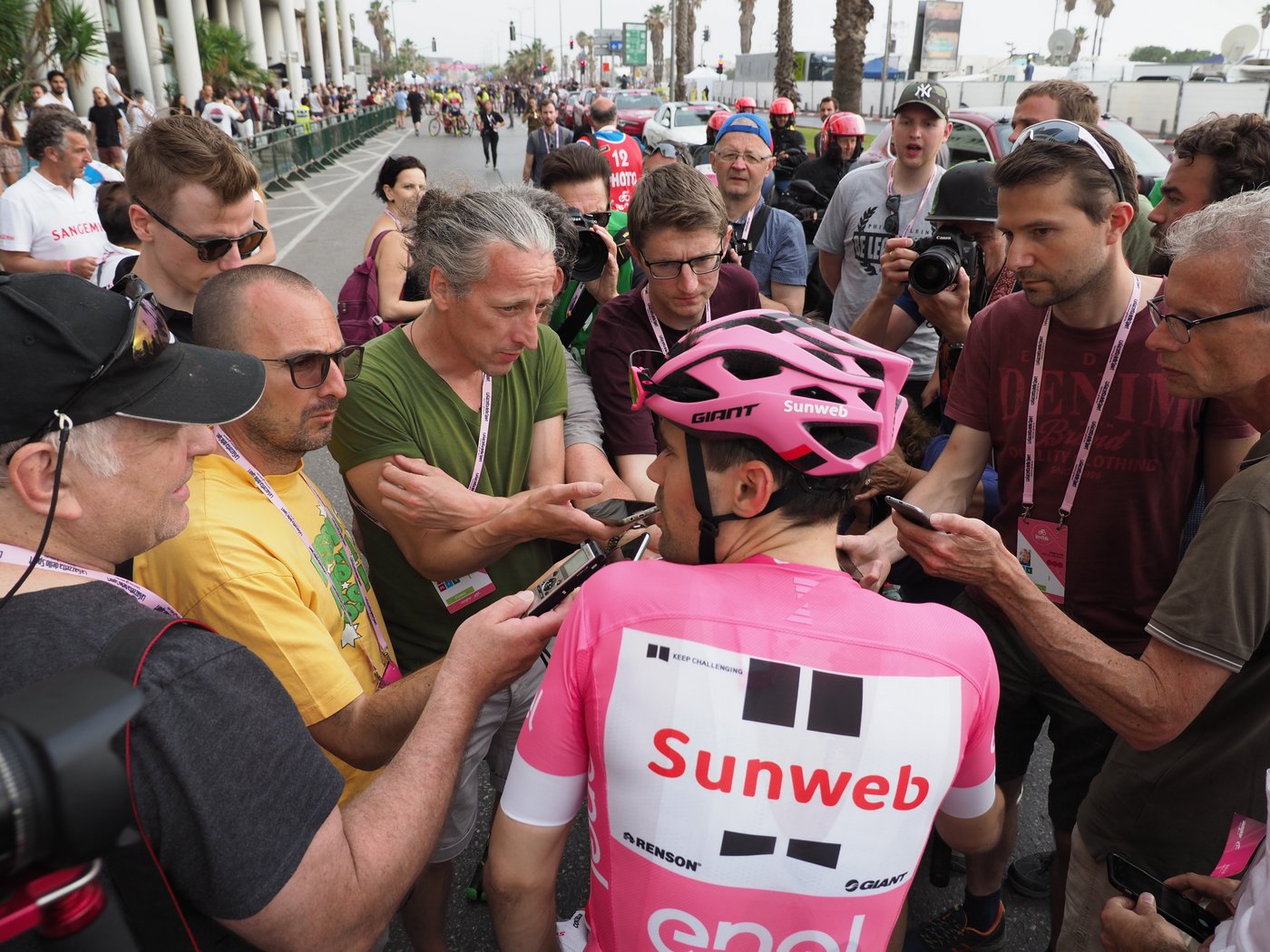 Sport has always been part of politics

Politics had always influenced sports, one can’t deny, but fortunately there has always been strong forces defending the sport, reducing the dividing and conflictual nature of political influence on sport. These forces, like RCS – organizers of the Giro d’Italia, make cycling a truly international and global sport, an island of sanity.

Voices to put politics aside, expect cycling to inspire people from all nations, countries and religions. Cycling events takes place in countries far from being democratic and free, many of them with severe human rights issues. Unlike Israel, many of them deny women rights, fight and forbid LGBT communities or impose totalitarian control over their citizens. Boycotting the coverage of these races doesn’t promote solving their citizens’ problems, and it also contradicts journalist’s role to bring true stories, opinions and impressions from first hand. 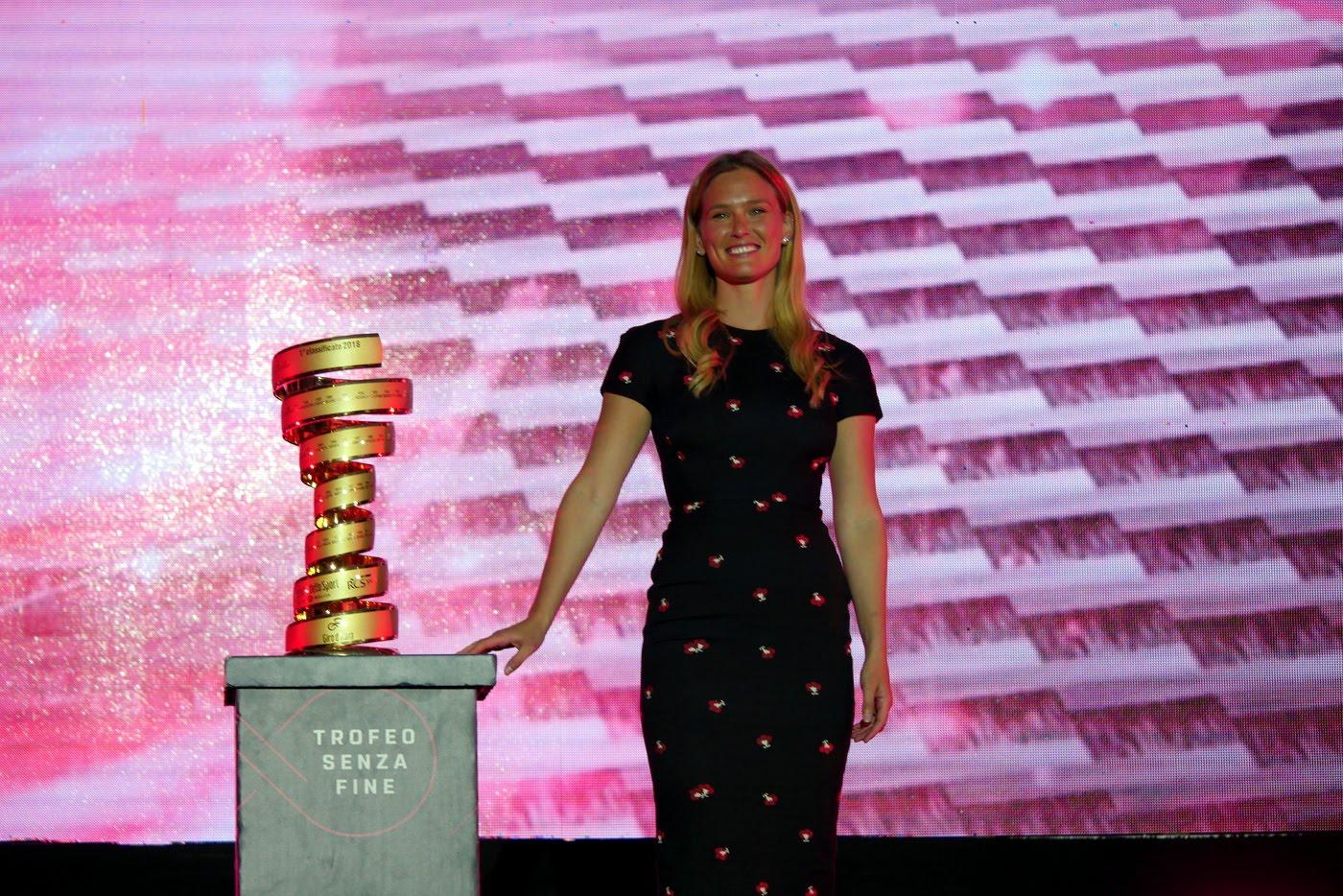 Why doesn’t Gaza has open borders?

Being moral and pro-human rights equals supporting normal lives for Israelis and Palestinians. It means supporting the right for everyone to live their lives as they wish without forcing any ideology upon them. This is not the plan of Hamas for the people of Gaza.

The only demand Israel has for this little strip of land is demilitarization. If Gaza would have been demilitarized it could have enjoyed open borders with both Israel and Egypt long ago. It could have prospered by Israeli and global investments. But Hamas chose to inflict Jihad and terror from Gaza. Hamas denies Israel’s right to exist and provokes violence on the fence and beyond. These realities are omitted from Stokes’ opinion piece. 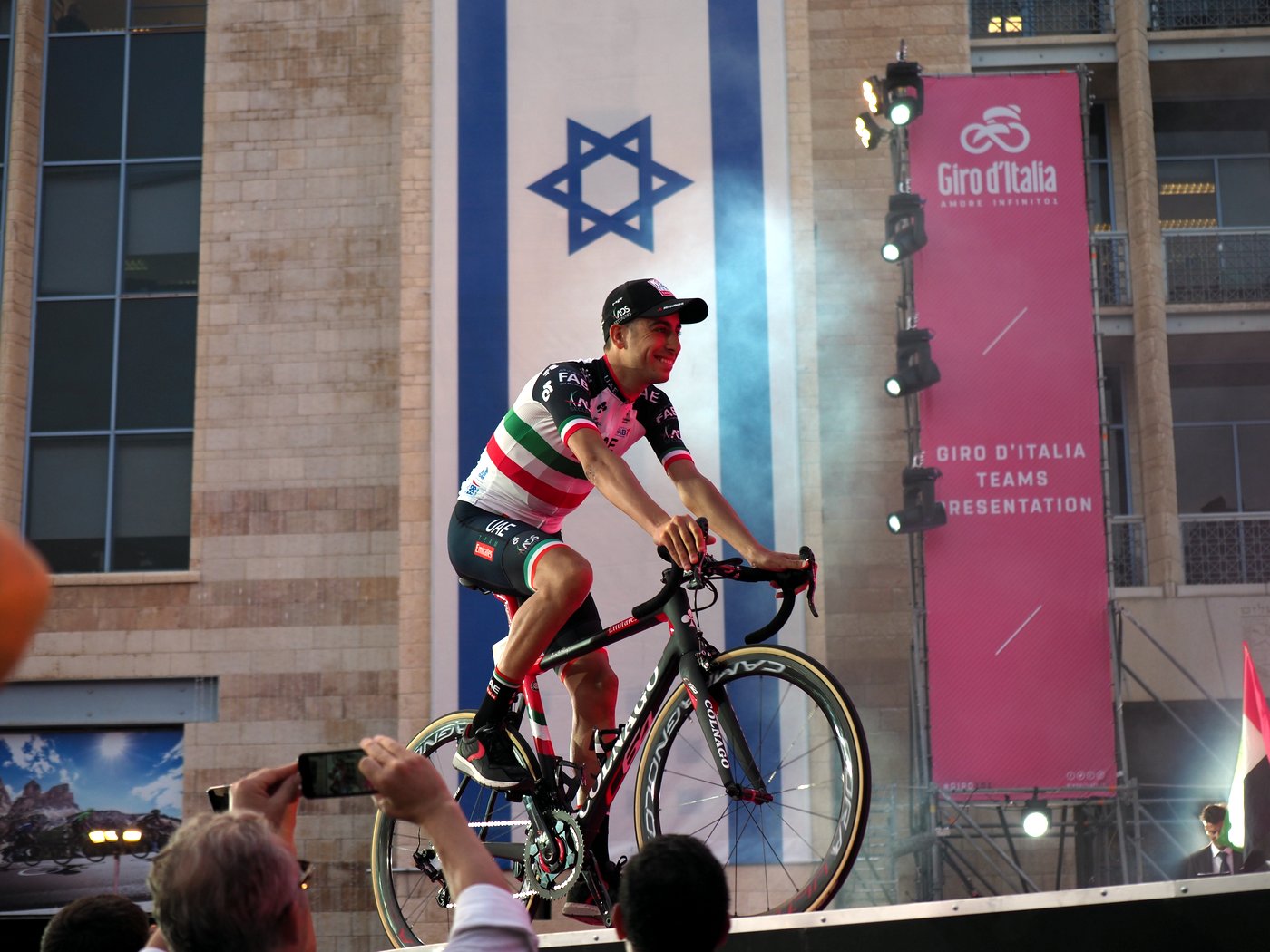 We should strive to bring normalcy to this region – something the Giro epitomizes. Supporting sport, pluralism, and opposing religious driven politics and nationalistic ideologies in both sides is what this region needs.

Israel is not perfect. I oppose the current coalition and government, which drives towards one state solution and settlements. But as a proud pro-human rights voter in Israel, seeking for a two state solution, reading this Cycling Tips article – normally high-quality journalism – provides only a outsiders view of the reality on the ground. In reading it, all it has done is promote radicalism on both sides.

Being a moderate Israeli living through this, someone who wants peace. Someone who has served in the military and knows how careful it tries to be under impossible circumstances, it is frustrating to see how easy it is for western liberals to take the side of any "oppressed" people without seriously considering that (while they do suffer) they might be responsible for their own status.

My prime minister Rabin was murdered after trying to reach out to Palestinians. All left hand governments in Israel made significant efforts but Palestinian leadership denied them. The current regime in Gaza is run by external state actors, using the Palestinian people as proxies for a war against Israelis and more subtly, Jews. 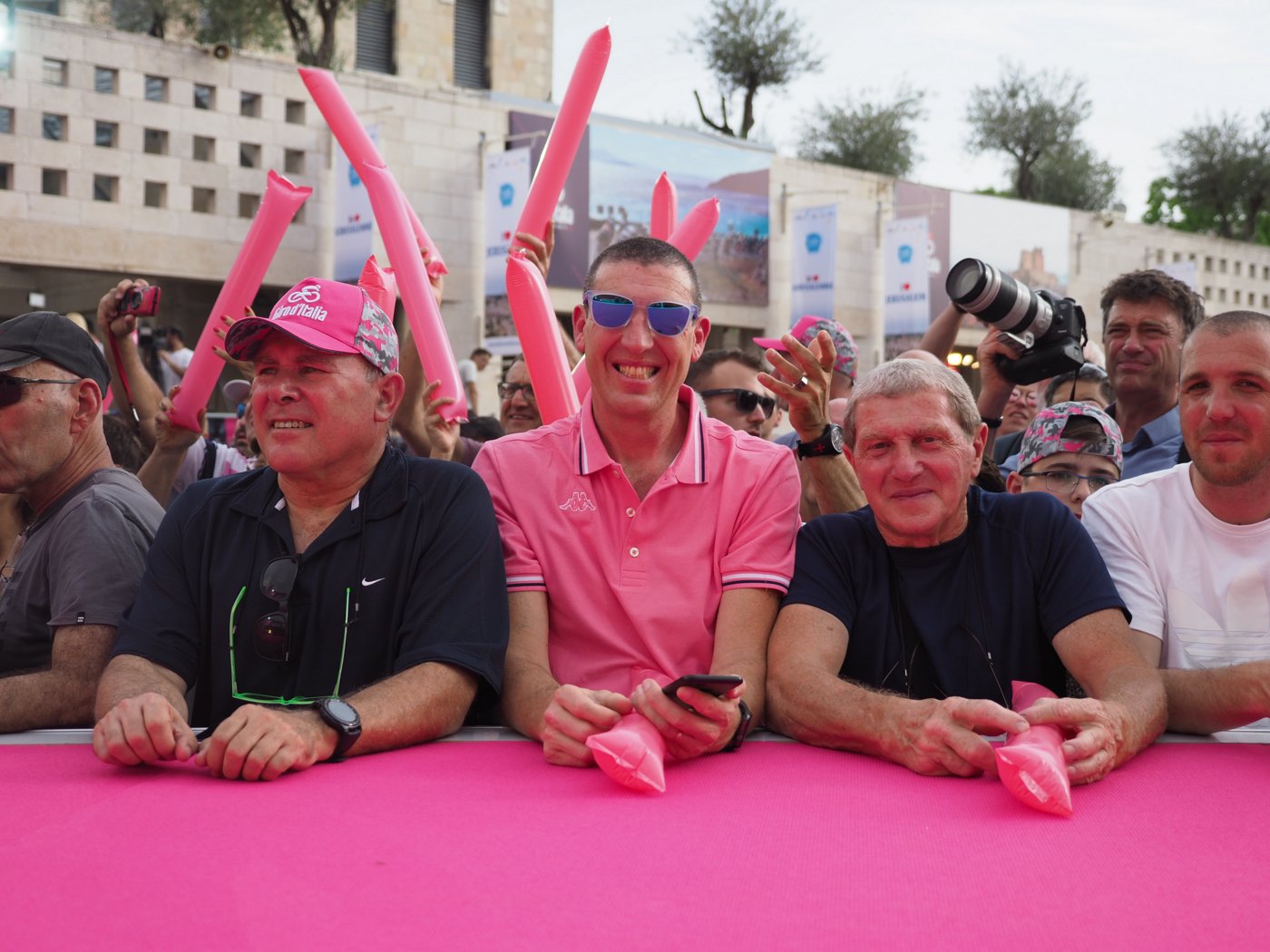 Let’s talk some more about context for a bit: “it’s complicated” is often said about the conflict, but the problem and solutions are rather simple. Making people from both sides agree to make the compromises required in order to accept them is the complicated part.

To really simplify the story I’ll call my spiritual and ideological Israeli-Palestinian brother – Nas Daily to provide the solution in one minute:

Well there’s some complexity after all: the Muslim world is torn in a deadly political and religious battle between Shia and Sunni Islam, and between Jihadists and moderate forces. Within this complexity Israel faces not “Palestine” but “Palestine 1” and “Palestine 2”- each in a battle against the other.

Recent Gaza clashes started after P1 stopped paying for salaries in P2. Trump’s declaration regarding the embassy in Jerusalem is perfectly aligned to portray this battle as just another phase in the Israeli-Palestinian conflict. Within these tectonic and historical battles inside Islam, new partnership and alliances are born between Israel and neighboring countries. The thing is – they forgot to update Europeans and Australians: The BDS is just one wing on one of those sides. It doesn’t represent the Palestinian people nor moderate Islam and moderate Arab countries which Israel is partnering with. 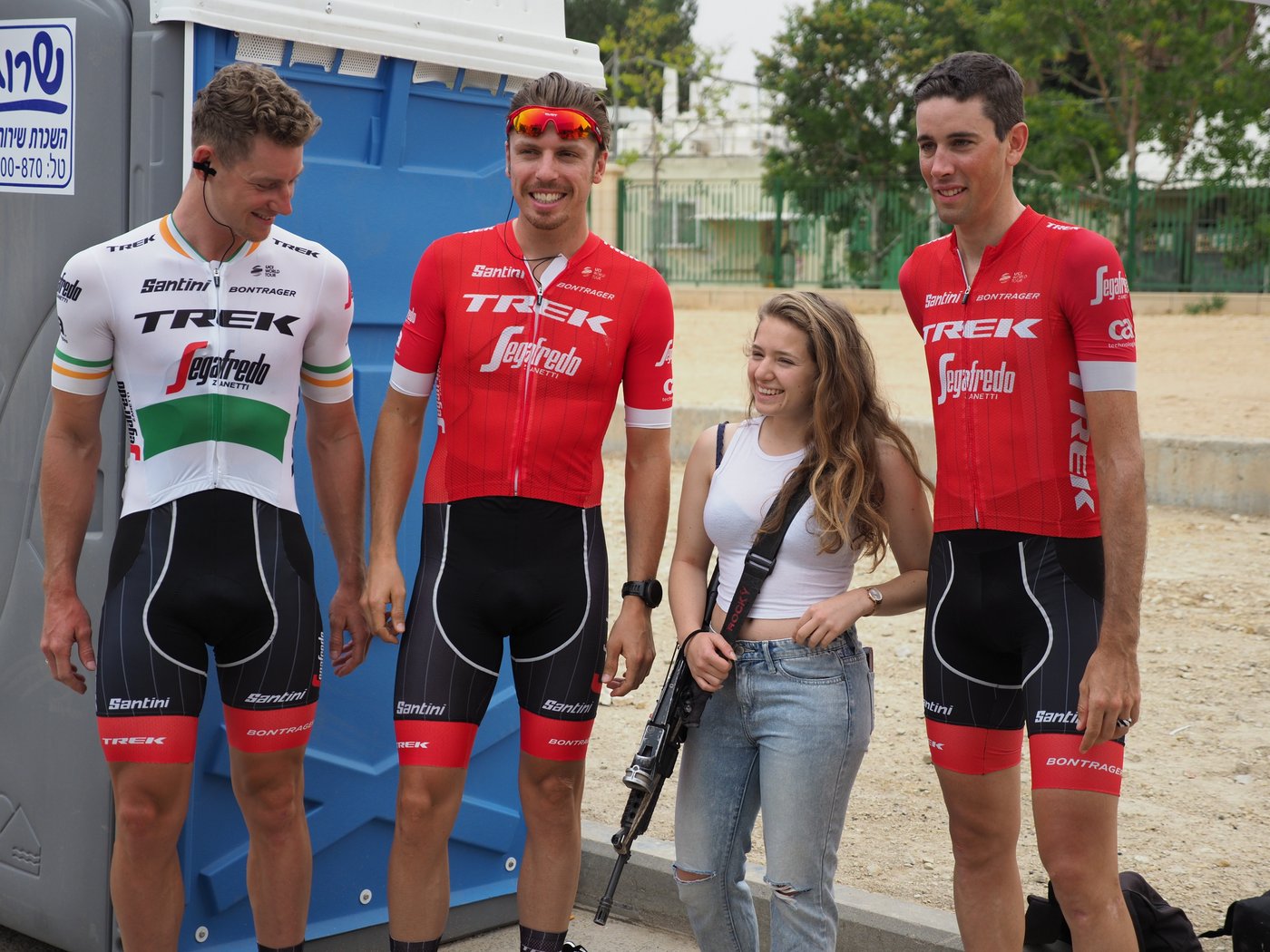 The significant human rights abuses in the Middle East are not happening in Israel rather in Syria where large scale suffering and tragic loss of lives deserves much more global attention. Interestingly the same snake head is involved deeply in both destabilizing Palestine and Syria: Iran. The pain in Gaza is not inflicted by Egypt nor by Israel; both co-operating in blocking its terroristic Hamas regime from smuggling missiles to Gaza for shooting them at Israel, and for destabilizing Egypt. It’s the pain, killing and terror made by Hamas on its own citizens. A cynical and extreme regime that capitalizes on every victim of its own people- which is then served as propaganda and accepted blindly by members of the media. 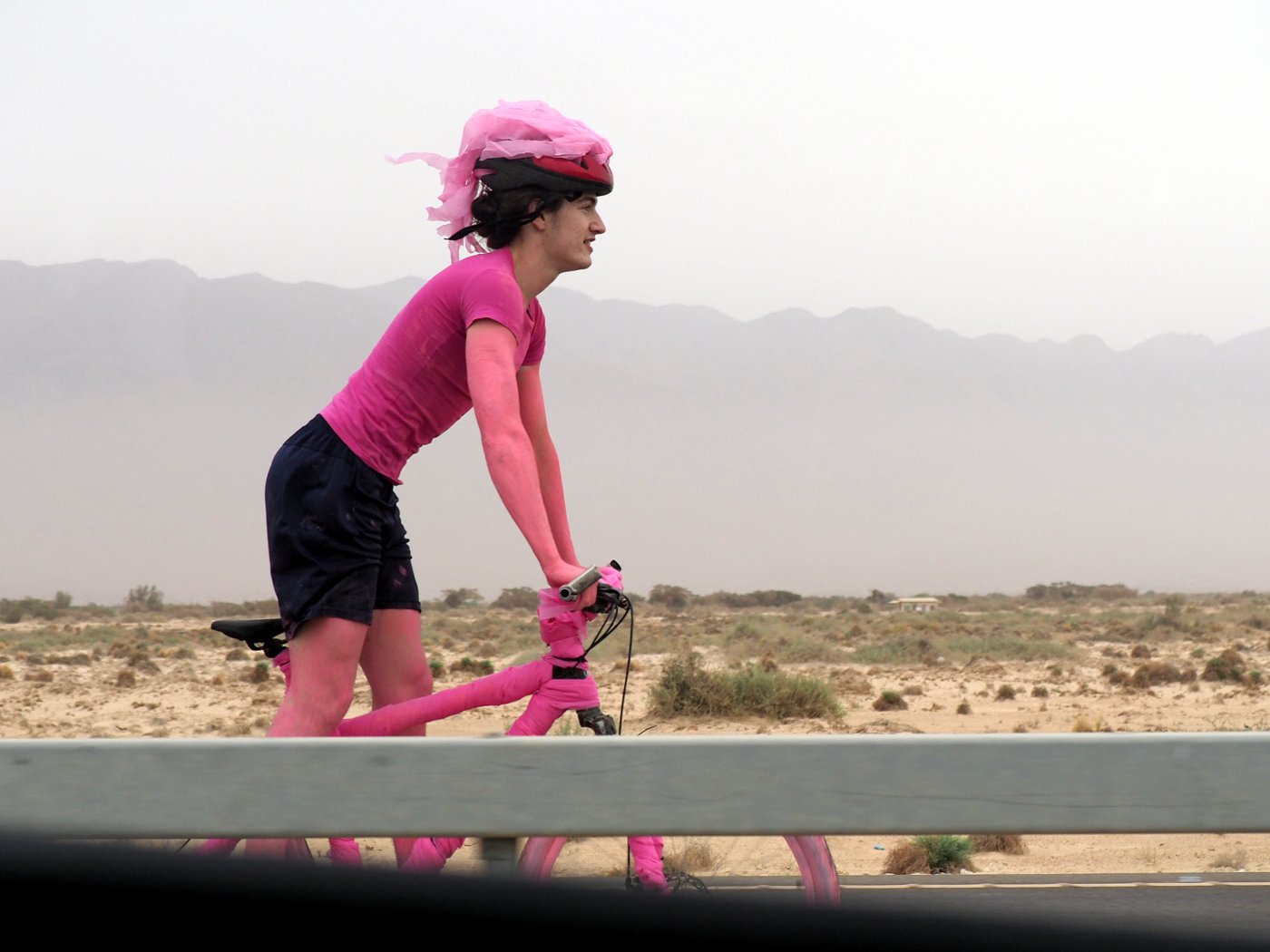 Towards the sprint in Eilat

Israel is not controlling Gaza anymore

Its a another forgotten fact: a huge experiment was made – Israel withdrawal should have allowed Palestinians to rebuild Gaza and normal lives there, but they chose terror. There is nothing we would wish for Gaza other than prosperity, but Gaza must stop trying to kill us first. (Hamas had managed to lose even the support of pragmatist Arab countries. Terror, fear, fanatic jihad on anything who isn’t Muslim is the Hamas language- linked directly with those exploding in European streets, killing hundreds and thousands globally, and hopefully not in Australia as well.)

Stokes enjoys portraying a black and white world where Israel is always bad and the Palestinians are always a victim. This is a common narrative. Each unfortunate victim of the conflict delights the haters of Israel – this is the true motivation of the protests near the fence: Hamas wants Palestinian bloodshed for one reason alone: to extract articles from the likes of Cycling Tips who happily serve a tool for terrorists. 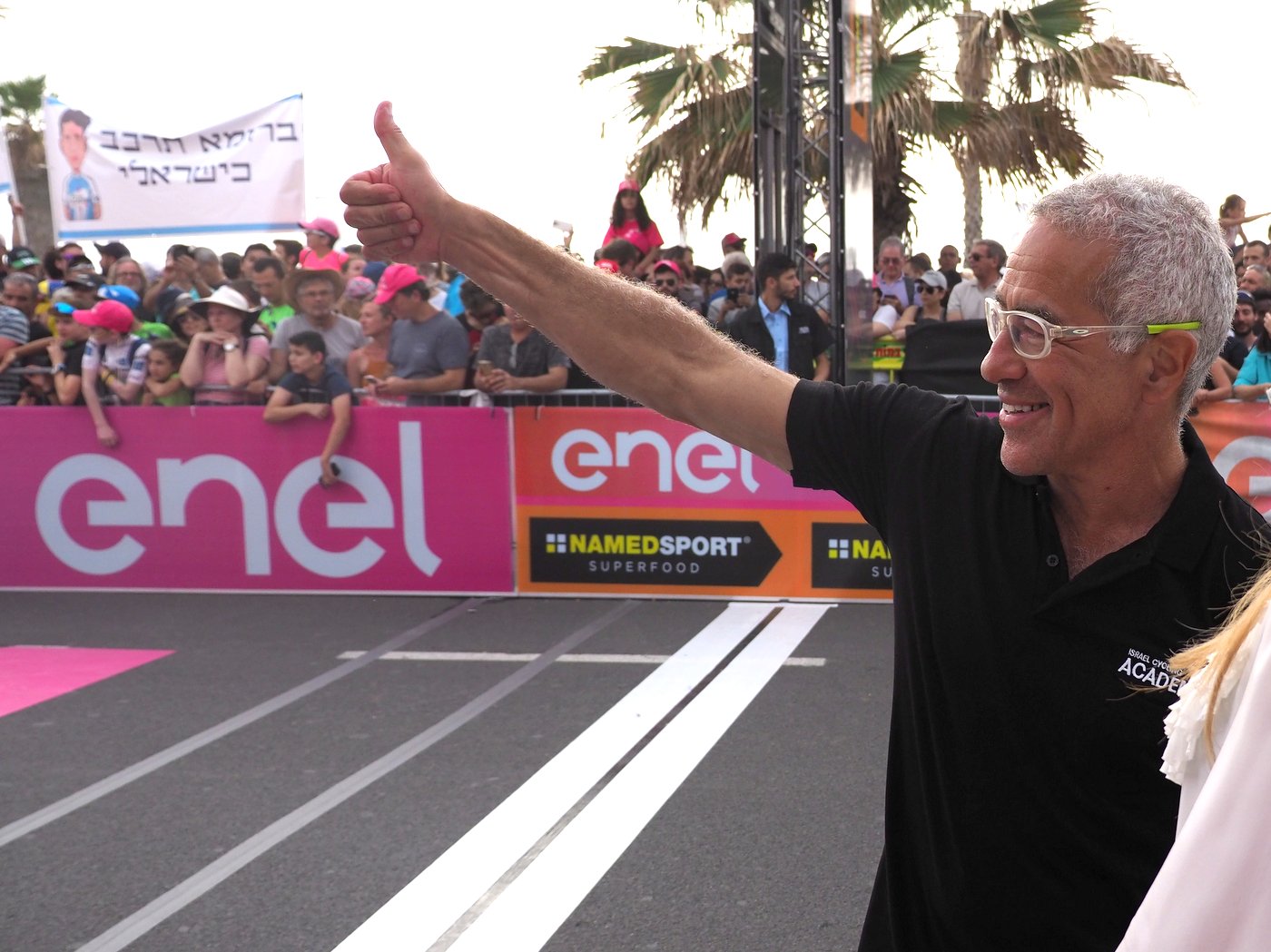 How Cycling can bring people together

Sylvan Adams, co-owner of Israel Cycling Academy, the one who had funded a significant part of bringing the Giro to Israel, was also the one to fund our first Velodrome here. On the happy and optimistic Tel-Aviv velodrome launch event, Adams portrayed one of the venue targets: to serve as a regional cycling excellence center- where neighbor country cyclists including Palestinians could come and train with Israelis.

Peace is made by pragmatists – not puristic idealists, and pragmatists look at the sport and cycling as a tool to promote connection between people and nations.

Shane Stokes- if you want to make proper journalism you should come here, and know the place and people from the ground- not from TV. I’d like to invite you to Israel to ride with me. I’ll take you to our preferred rides in Israel (not the highways seen on the first stages), and show you around. 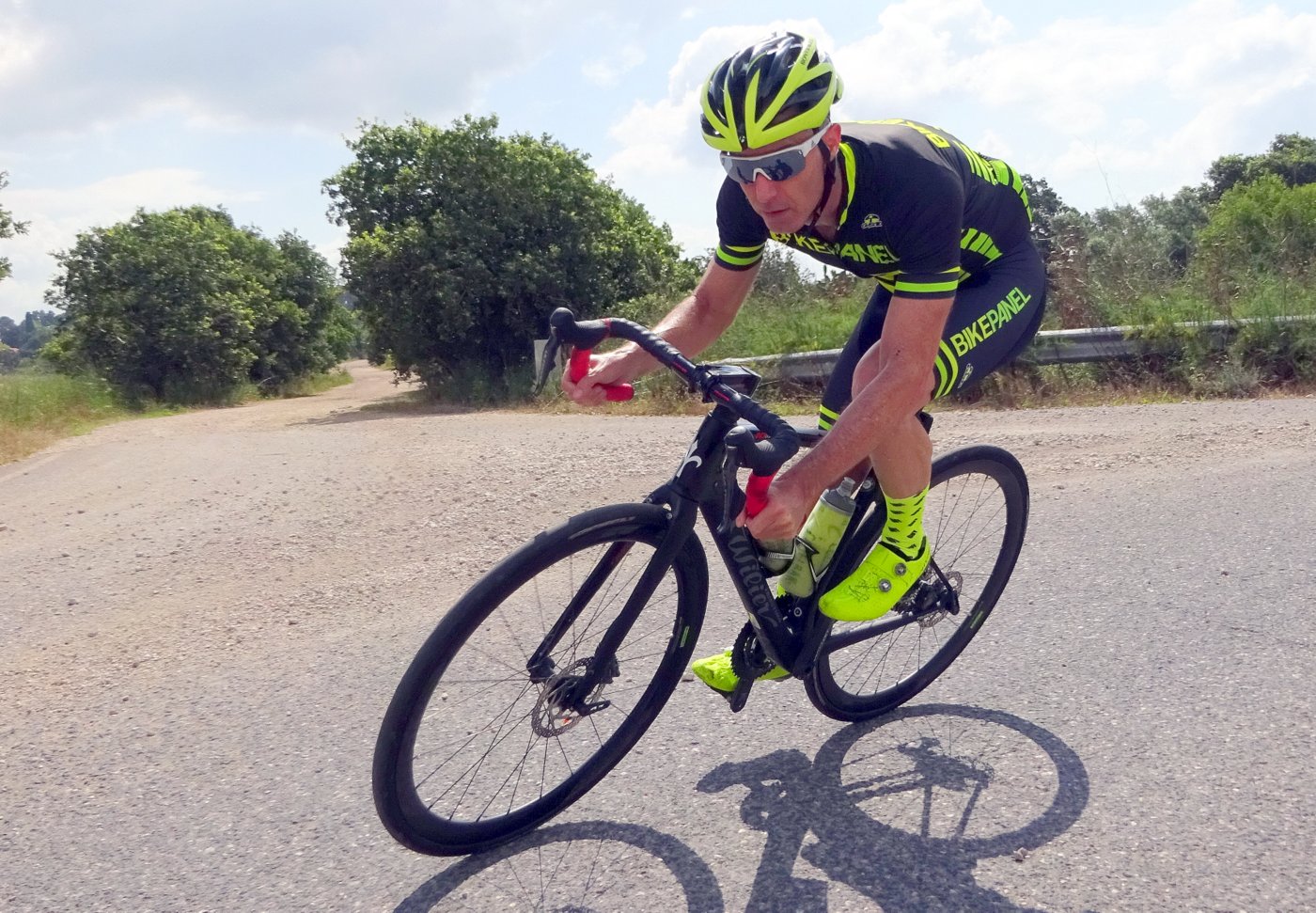 Guy is the founder and editor of BIKEPANEL. After earning his Political Science first degree and MBA from Tel Aviv university, he continued to the Israeli hi-tech industry for 20 years. He then left to pursue his passion for cycling and sport and founded BIKEPANEL- Israel’s leading cycling magazine.